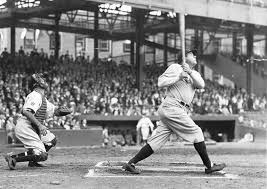 Baseball is considered as a traditional game in America. Although it has not be professional or famous as American basketball or football, baseball still shows a part of history and culture of the USA. So, it is always valuable in this nation.

In this article, we will discuss some major events about history of baseball in the USA.

In general, baseball has complicated history about origins. Until now, someone has disputes about the true origins of baseball due to all documents are some uncertain.

The first opinion think that baseball has origin since the ancient Egypt at Europe. People used ball and bat in common as a game. Then it was spread to the USA.

However, other showed that baseball has origins from the USA. It made inspiration from rounder in the UK. Then it was modified into baseball in the USA and started to play officially since the 18thcentury.

The fact, baseball is considered as a pastime game in the USA.

In the 19thcentury, baseball in the USA was really developed strongly throughout anywhere in this nation.

The rules about baseball was launched in 1845 by Alexander Cartwright- team founder of project. A commitment about baseball called as the Knickerbocker rules about this game as an important role to create modern game for the modern society.

After this match, all baseball matches established in New York area was adopted the New rules officially.

This event played an important role to create meanings and developments for baseball in the UK.